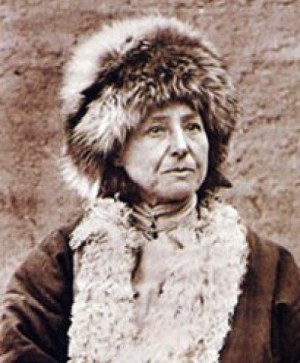 Alexandra David-NÃ©el, born Louise EugÃ©nie Alexandrine Marie David, was a Belgian-French explorer,spiritualist, Buddhist, anarchist, and writer, most known for her visit to Lhasa, Tibet, in 1924, when it was forbidden to foreigners. David-NÃ©el wrote over 30 books about Eastern religion, philosophy, and her travels. Born in Paris in 1868, she moved to Ixelles (Brussels) at the age of six. During her childhood she had a very strong desire for freedom and spirituality. At the age of 18, she had already visited England, Switzerland and Spain on her own, and she was studying in Madame Blavatskyâ€™s Theosophical Society. â€œShe joined various secret societies â€“ she would reach the thirtieth degree in the mixed Scottish Rite of Freemasonry â€“ while feminist and anarchist groups greeted her with enthusiasmâ€¦In 1899, Alexandra composed an anarchist treatise with a preface by the French geographer and anarchist ElisÃ©e Reclus (1820-1905). Publishers were, however, too terrified to publish the book, though her friend Jean Haustont printed copies himself and it was eventually translated into five languages.â€ Quotes â€œNeglecting small things under the pretext of wanting to accomplish large ones is the excuse of a coward.â€ â€œSuffering raises up those souls that are truly great; it is only small souls that are made mean-spirited by it.â€ â€œDogs bark, cats miau: It is their nature. My nature is to doing philosophy. Select a star, never quit it from your eyes. This star will advance you very far, without pain or feeling fatigued.â€ â€œLandscapes have a language of their own, expressing the soul of the things, lofty or humble, which constitute them, from the mighty peaks to the smallest of the tiny flowers hidden in the meadowâ€™s grass.â€
Share this
0 likes
Related Articles
1,569 Comments