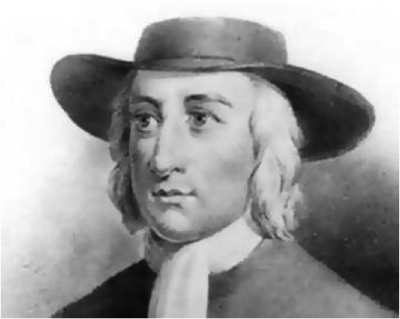 (July 1624 â€“ 13 January 1691) An English Dissenter and a founder of the Religious Society of Friends, commonly known as the Quakers or Friends. Quakers were known for their use of thou as an ordinary pronoun, refusal to participate in war, plain dress, refusal to swear oaths, opposition to slavery, and teetotalism â€“ the opposition to alcohol.

I told [the Commonwealth Commissioners] I lived in the virtue of that life and power that took away the occasion of all warsâ€¦ I told them I was come into the covenant of peace which was before wars and strife were.

One man raised by Godâ€™s power to stand and live in the same spirit the apostle and prophets were in, can shake the country for ten miles around.

Be patterns, be examples in all countries, places, islands, nations wherever you come; that your carriage and life may preach among all sorts of people, and to them; then you will come to walk cheerfully over the world, answering that of God in everyone; whereby in them you may be a blessing, and make the witness of God in them to bless you.